what is the measure of arc qr? 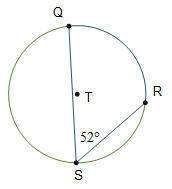 2. An inscribed angle is an angle formed by three points on the circle's circumference.

Angle at the Center Theorem: An inscribed angle is half of the central angle (if they determine the same arc).

In your case angles:

Then by Angle at the Center Theorem, m∠QTR=2m∠QSR=2·52°=104°. Arc QR has the same measure as central angle QSR.

Geography, 19.09.2019 08:00
Europeans' desire for less control from a central government and greater local political autonomy is an example of...

Biology, 19.09.2019 08:00
It says up top.. "human genetic material is represented in the diagram below" then the question asks "the region labeled a is made up of a section of"