bianca and giselle are playing a game. the goal of the game is for giselle to draw a triangle that is congruent to bianca's triangle. bianca calls out a combination of side and/or angle measures of her triangle, and giselle draws the triangle, labeling the measures as she goes.

Two triangles will be congruent if they have the same three sides and same three angles. Giselle won't be able to draw a triangle congruent to Bianca's triangle as there is not enough information.

Information needed to draw a triangle congruent to another triangle:

So, there is not enough information, the triangle Giselle would draw based on the given information may not be congruent to Bianca's triangle. 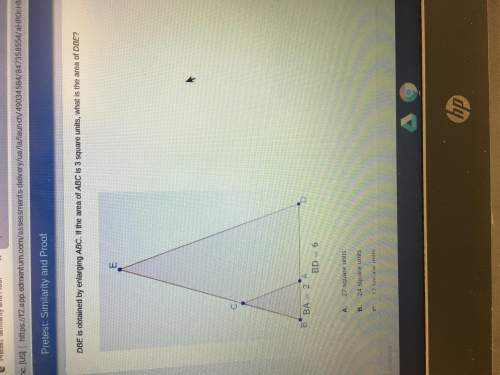 arithmetic sequence: a sequnce in which the diffrence between any two consecutive terms is the same

Mathematics, 21.06.2019 20:40, stotherow5
Describe the symmetry of the figure. identify lines of symmetry, if any. find the angle and the order of any rotational symmetry.
Answers: 1
continue

Mathematics, 21.06.2019 21:30, BluSeaa
Raquel recently attended a philadelphia union's soccer game. the ball went out of bounds and hit a nonobservant spectator. to complete the proper insurance paperwork, the volume of the ball was determined as 350 cubic inches. what was the ball's diameter
Answers: 1
continue

Mathematics, 24.06.2019 16:40
Triangle 1 is transformed onto triangle 2 in the graph below. which are true statements about the translation? the sides of the image and pre-image are congruent. the image is tur...

English, 24.06.2019 16:40
In the years that followed, i failed her many times, each time asserting my will, my right to fall short of expectations. i didn't get straight as. i didn't become class president....

Biology, 24.06.2019 16:40
Pku (phenylketonuria) is an autosomal recessive disease, in which the synthesis of amino acid tyrosine from phenylalanine is blocked. as a result, an excess of phenylalanine gets c...