answered: isabua
Japenese soldiers bombed pearl harbor causing us to join world war ii, then towards the end of the war they refused to surrender to us so we dropped bombs on hiroshima. that's pretty much all i know. hope it helped!

answered: larahanna
1. Japan was not showing signs of surrendering
2. Reason to not drop the bomb was because American troops were over there and the lives of all those Japanese people would've been affected forever and a mass death loss.
The last part is your opinion

1.Truman ordered the attack because Japan did not officially surrender.

2. During the time of the decision regarding bombs, Japan was already defeated.

3. Japan was not supposed to be bombed.

Explanation: can i get brainliest please

1.Truman ordered the attack because Japan did not officially surrender.

2. During the time of the decision regarding bombs, Japan was already defeated.

3. Japan was not supposed to be bombed.

Japan was already defeated in war but they did not give a reply to Truman's Postdam Declaration. This was the main reason why Japan was bombed.

In my personal opinion, the attack should have never happened because the casualties and destruction were enormous.

The reason not to bomb Japan:

After Truman ordered the attack on Hiroshima and Nagasaki, the bombs were dropped and Japan surrendered.

The casualties and the disaster could have been avoided by giving Japan more time to consider the facts and surrender officially.

if this is for ww2, because they messed w/ the dragon and had to taste the fire. as a result, we had no choice but to send the peace medallion they gave us BACK to them on the nose of a fatboy bomb. this was comical to me when i read it. :P

nuclear weapons are hoaxes. many people believe they are real, though.

The bomb should have been dropped for a variety of reasons. For one, the war needed to be ended as quickly as possible. Not only would an invasion of Japan take much longer, it also had a potential death toll of over a million on both sides. Finally, utilizing our atomic bombs would demonstrate to all the other nations the United States' strength and solidify us as a world power

The reason the bomb should have been used on japan is because of the attack on pearl harbor, the japanese cost the american forces many lives in the past. In the pacific war alone america lost almost 170,000 lives. With the soviet union being in the war it maded the rival side stronger.

The atomic bomb played no decisive part, from a purely military point of view, in the defeat of Japan." Admiral William D. Leahy, Chief of Staff to President Truman, said the same thing: "The use of [the atomic bombs] at Hiroshima and Nagasaki was of no material assistance in our war against Japan.

Truman did not seek to destroy Japanese culture or people; the goal was to destroy Japan's ability to make war. So, on the morning of August 6, 1945, the American B-29 bomber, the Enola Gay, dropped the world's first atom bomb over the city of Hiroshima.

answered: whaddup8428
It was argued at the time at the atomic bomb should be used on Japan because the Japanese made it clear that they would otherwise have fought to the last man--which would have cost even more lives in the long-run.

the answer is prolly b 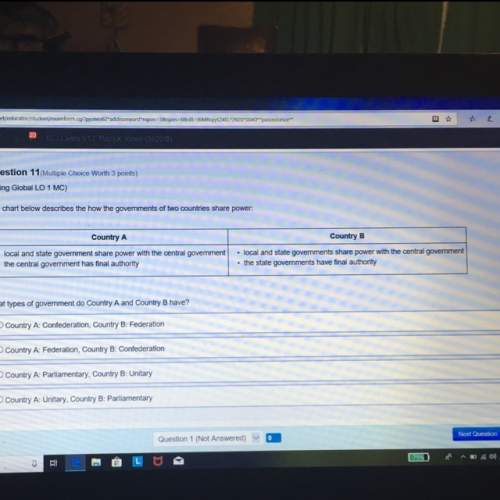 the section of the chart that represents a point at which a bill needs approval from a majority of people in both chambers to advance is j, as this is the only section before the bill becomes law which has both rows (symbolizing the chambers) converging into one, meaning that the two parts of the congress have to approve of it before it can march on with the process.

History, 21.06.2019 20:30, nancylagunas805
Explain the importance of president harry truman's order to integrate the u. s. military and the federal government.
Answers: 1
continue

History, 21.06.2019 22:00, hixoxo
What are two effects of the lack of representation of the third estate in the estates-general? two answers
Answers: 1
continue

Social Studies, 03.10.2019 02:30
Difference between positive and negative feedback definition...
Other tasks in the category: History More task
Total solved problems on the site: 8853776
Instant access to the answer in our app
And millions of other answers 4U without ads