He inspired other leaders to be non-violent.

because he protested against corrupt governments in a peaceful way.

because he protested against corrupt governments in a peaceful way.

The correct answer is b) he inspired other leaders to be non-violent.

Gandhi is considered one of the most influential people of the 20th century he inspired other leaders to be non-violent.

Gandhi led India to gain Independence from Great Britain. He used non-violent actions to apply pressure to the government and to impulse the movement of India’s independence. That was his most precious gift to the world. To show other leaders and nations that things could change with commitment, persistence, and non-violent actions. He taught the world that violence was not an option and that a peaceful movements could change regimes.

answered: gyexisromero10
Gandhi is considered the most influential person mainly because he was one of the main reasons for India's independence and also because he fought for equality almost certainly like Martin Luther king

answered: mercedesamatap21hx0
I think the answer is b

answered: wolfking800
I'm gonna say he's influential because of his ideology of peace and not using violence when unhappy and he also focused on being a better person. I think he also put more focus on self sacrifice meaning not being selfish. Through this ideology he was able to influence a lot of people in a positive way. I think the major legacy of Gandhi is peace.

answered: aly95
b)He inspired other leaders to be non-violent. 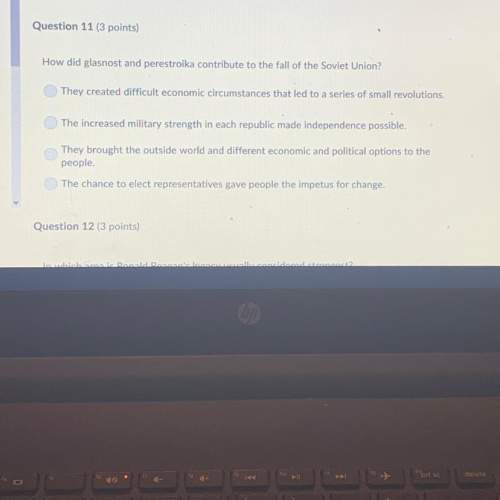 to unite muslims and hindus in resistance against british colonialism.

History, 21.06.2019 15:00, moniquejg1800
What create a global village and the emergence of a new international popular culture
Answers: 2
continue

History, 21.06.2019 17:50, kodak0531
Which of the following was a similarity between classical mesoamerican and south american civilizations ?
Answers: 2
continue

History, 21.06.2019 22:30, girlwholikesanime
Which is not an abundant natural resource found in africa?
Answers: 1
continue

History, 22.06.2019 11:50, jacobmclawhorn3001
Which fact from the tinker v. des moines court decision best supports the reasoning that the conduct of the student protesters was protected by the fourteenth amendment, which prohibits deprivation of life, liberty, or property? o a. the record shows that students in some of the schools wore buttons relating to national political campaigns, and some even wore the iron cross, traditionally a symbol of nazism. o b. on the other hand, the court has repeatedly emphasized the need for affirming the comprehensive authority of the states and of school officials, consistent with fundamental constitutional safeguards, to prescribe and control conduct in the schools. c. the action of the school authorities appears to have been based on an urgent wish to avoid the controversy which might result from the expression, even by the silent symbol of armbands, of opposition to this nation's part in the conflagration in vietnam. d. that they are educating the young for citizenship is reason for scrupulous protection of constitutional freedoms of the individual. if we are not to strangle the free mind at its source and teach youth to discount important principles of our government as mere platitudes.
Answers: 1
continue
Do you know the correct answer?
Why is gandhi considered one of the most influential people of the twentieth century...

Physics, 05.11.2020 22:50
* Required 3 A student put room-temperature water into a bottle. She pushed a stopper and tube into the bottle until the water came halfway up the tube. Th...

History, 05.11.2020 22:50
After incorporation, state governments had to: (A. include a way to amend state constitutions. (B. decide how to apply Bill of Rights protections (C. determine whether to ratify t...

History, 05.11.2020 22:50
All of the following but one were outcomes of the Thirty Years' War a The Netherlands gained independence. b Germany became the largest nation on continental Eur...

Mathematics, 05.11.2020 22:50
PLEASE HELP ASAP ONLY 20min left Write an equation that represents the line. Use exact numbers
Other tasks in the category: History More task
Total solved problems on the site: 13538848
Instant access to the answer in our app
And millions of other answers 4U without ads