Match each of the following laws with the effect it had on native americans. 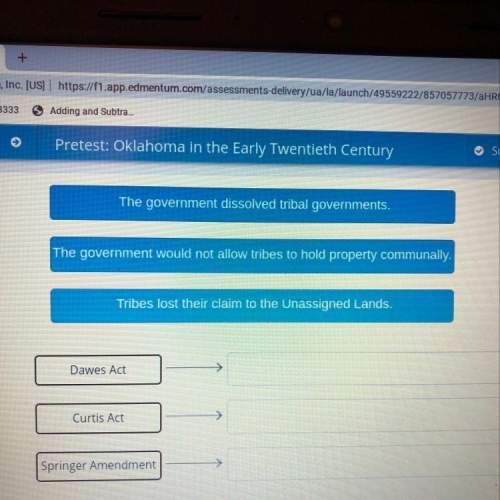 Springer Amendment - Tribes lost their claim to the Unassigned Lands

Dawes Act: The government would not allow tribes to hold property communally.

Springer Amendment: Tribes lost their claim to the Unassigned Lands.

The Dawes Act was passed in 1887. This law considered Native Americans as individuals, rather than members of tribes. Because of this, the government did not allow the tribes to hold property communally. The Curtis Act was an amendment to the Dawes Act. It dissolved tribal governments and led to the break-up of communal lands. Finally, the Springer Amendment led to the placing of Unassigned Lands of Indian Territory within the federal public domain.

answered: Guest
Ithink the answer is d but don’t answer it. i need points.

answered: Guest
For pro eating sensory information i believe it would be the parietial lobe.

History, 21.06.2019 19:30, xxkeyxx51
Why were inventors essential or necessary for an industrial revolution to happen in america
Answers: 1
continue

History, 21.06.2019 23:30, myla18jabbar
How did the beliefs of the roman catholics differ from the eastern orthodox form of christianity?
Answers: 1
continue
Do you know the correct answer?
Match each of the following laws with the effect it had on native americans.
...

Arts, 26.07.2019 06:30
Esther works at a large hospital where she plans food-service programs. she monitors and records information regarding patients’ diets and intake, and is developing a new meal plan...

English, 26.07.2019 06:30
The best definition of a customer is: someone who buys what a company sells to the public someone who uses the services of a back office department someone to whom you provide a p...

English, 26.07.2019 06:30
9. read the advertisement. for vim and vigor, drink vitasip! this amazing new sports drink will make you feel energetic, clear-headed, and ready to face the world. vitasip is cho...
Other tasks in the category: History More task
Total solved problems on the site: 8001146
Instant access to the answer in our app
And millions of other answers 4U without ads