Igot out a bowl and read the recipe and then i started adding ingredients. after which word should a comma be placed? bowl then recipe

answered: helplessstudent3
There is only one 'and' as it indicates a sequence of actions.You don't have to repeat the subject 'I' .The first one is valid for all the other actions as it's the same person doing them.
I got out a bowl ,read the recipe and then started adding the ingredients,

answered: harris435942
The comma should be added after the word bowl. Commas need to be added after conjunctions. Conjunctions include for, and, nor, but, or, yet, so (FANBOYS). Hope this helped :))

A comma should be added after the word "recipe", since it is here that the sentence can be broken into two independent clauses.

13. The sentence which has correct capitalization is the following one:

The words which are in the beginning of a sentence must be capitalized, and that includes verbs, articles, nouns, etc.

14. The sentence which has correct capitalization is the following one:

The wrestling match was between our high school and King High School in Austin, Texas.

The first time the term "high school" appears, the name of the institution is not mentioned, so it does not have to be capitalized. The second time, however, we see the name of an institution, so it must be in capital letters (King High School), since it becomes part of a proper noun. Plus, names of cities must be capitalized at all times (Austin).

15. The sentence which is punctuated correctly is the following one:

“Thunder is good,” said Mark Twain, “but it is lightning that does the work.”

16. The sentence which is punctuated correctly is the following one:

Work-hardened sterling silver wire is stronger than wire that has not been hammered.

17. The word after which a comma should be placed is the following one:

The word "recipe" appears at the end of a sequence of two actions connected by the connective of addition "and" (I got out and read the recipe). Therefore, a pause is needed (with a comma), since another action takes place right after it.

18. The sentence which is punctuated correctly is the following one:

Don wore braces on both of his legs; still, he was an avid runner.

A longer pause is needed after a sentence whose follow-up sentence expresses contrast to it. Therefore, a semicolon is used so that pause is achieved. Plus, the comma placed after "still" is also there for a reason: to emphasize the aforementioned contrast (with a quicker pause).

19. The word which should be capitalized to correct the sentence is the following one:

It is part of the name of an institution. Therefore, it becomes part of a proper noun, which should always be capitalized, even if it consists of more than one word.

20. The word after which a comma should be placed is the following one:

The word above appears right at the end of a clause, and right before the beginning of a new one. Therefore, it is necessary to separate the two clauses with a comma.

21. The sentence which is punctuated correctly is the following one:

Rain poured in the open windows, through the sunroof, and even into the trunk.

We see the description of three places through which rain poured. In fact, three prepositions are used to describe exactly what happened: in, through and into. Therefore, those three ways rain poured must be separated by commas. Plus, the use of "even" makes it even more necessary, in order to express emphasis.

22. The best way to fill in the blanks is the following one:

Symphony No. 5 in C Minor

It is a generic name for a symphony, so it does not need to appear between quotes.

23. The word after which a colon should be placed is the following one:

The word above appears right before a quotation, so a colon should be placed right after it.

24. The correct way to rewrite the phrase is the following one:

It refers to the center of one particular daisy, so the correct way to say it is "the daisy's center". Plus, the use of the definite article "the" implies we are talking about a specific daisy. It could not have been "the daisys' center", since the correct plural form for that noun is "daisies."

25. The correct way to capitalize the sentence is the following one:

My dad, aunt Maria, uncle Diego, and my cousin were all there, but Mom couldn’t come.

is this your complete question 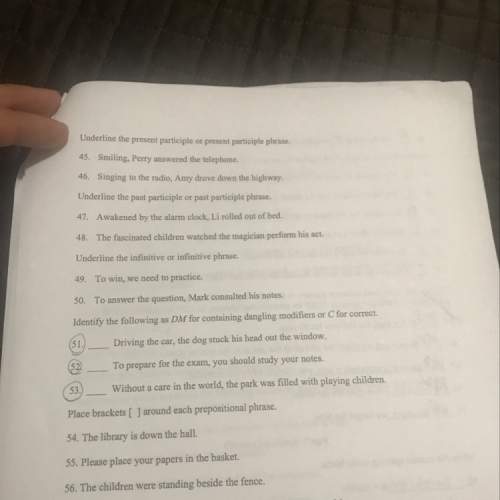 English, 21.06.2019 19:40, edeliz3886
Which of the following highlight the literary significance of elie wiesel's speech? select all that apply. it uses rhetorical devices to persuade with pathos. it assigns meaning to the existentialist nature of life. it won the nobel prize for literature. it attempts to put into words the unspeakable horror.
Answers: 2
continue

English, 21.06.2019 21:00, codyshs160
Take some time to create a cultural inventory. note the components of culture that have defined you and list as many as possible here. then write about the ways your unique culture affects your communication, i need i don't know how to start it off .
Answers: 1
continue

English, 22.06.2019 00:30, zaynmaliky4748
Plz halp. which statements are true about theme? check all that apply. 1.) themes are observations about life. 2.) themes can be stated in a sentence. 3.) themes and topics are the same thing. 4.) themes are messages a text conveys about a topic. 5.) examples of themes include loyalty, corruption, and greed. 6.)themes are rarely stated directly and need to be inferred by the reader.
Answers: 2
continue

Chemistry, 23.06.2019 23:30
If 2 molecules of one reactant combine with 5 molecules of another to produce 3 molecules of a product then which of the following is the correct representation of the reaction?...

Health, 23.06.2019 23:30
Recall what you know about common challenges to mental and emotional health. what are some signs or traits of individuals with low self-esteem, stress, depression, and mental disor...

English, 23.06.2019 23:30
In which sentence is the underlined clause an adverb clause? louis braille, who invented a way for blind people to read and write, taught his system to classmates. braille is a fo...

English, 23.06.2019 23:30
Which of these words or phrases sounds the strongest. afraid, scaredy, frozen with fear, skittish...
Other tasks in the category: English More task
Total solved problems on the site: 7494175
Instant access to the answer in our app
And millions of other answers 4U without ads