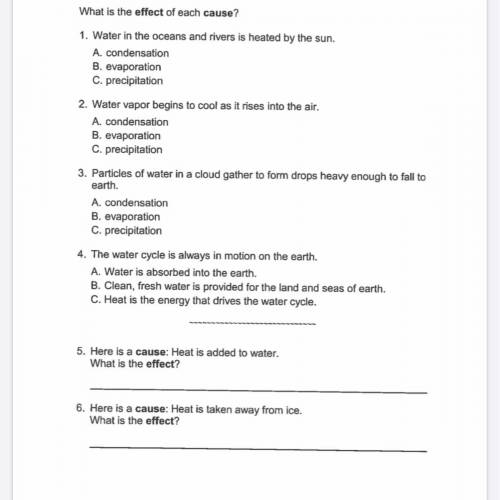 4. Water is absorbed into the earth

5. The water evaporates and turns into gas

6. The ice melts into liquid water.

this makes the correct assumption that it is a grocery store

i think the literacy device is "it's frozen head"

English, 21.06.2019 15:30, jessica01479
Stone, two or three feet thick, the door of wood and iron, a foot thick, and the iron grating which strained the light, i could not being struck with the foolishness of that institution which treated me as if i were mere flesh and blood and bones, to be locked up. i wondered that it should have concluded at length that this was the best use it could put me to, and had never thought to avail itself of my services in some way. i saw that, if there was a wall of stone between me and my townsmen, there was a still more difficult one to climb or break through before they could get to be as free as i was. i did not for a moment feel confined, and the walls seemed a great waste of stone and mortar. i felt as if i alone of all my townsmen had paid my tax. — “civil disobedience,” henry david thoreau based on this passage, how did thoreau feel about his confinement?
Answers: 1
continue

English, 22.06.2019 08:30, bobokitty
What did polonius (ophelia’s dad) request from her? what is the outcome of the request? what does
Answers: 3
continue
Do you know the correct answer?
May I have help on This page please This is about cause and effect
...

English, 28.09.2020 14:01
Activity 11: Making Inferences Directions: As explained earlier in this chapter, an inference is something a reader learns from a text through information that was never directly...

Mathematics, 28.09.2020 14:01
Becky leaves school to go home. She walks 6 blocks North and then 8 blocks west. How far is Becky from the school?...
Other tasks in the category: English More task
Total solved problems on the site: 14426340
Instant access to the answer in our app
And millions of other answers 4U without ads