What is a polyatomic ion?

Electronegativity is a chemical property that describes the tendency of an atom to attract a shared pair of electrons towards itself.

Oxygen (O) has greater electronegativity than phosphorus (P), because of that oxygen is partially negative and phosporus is partially positive.

Polyatomic ion is for example a molecule that has been ionized by gaining or losing electrons.

Ionic bond is the electrostatic attraction between oppositely charged ions (cations and anions).

Potassium chloride is a salt with ionic bond.

Substances with ionic bond conduct an electric current in liquid and aqueous solutions, but not in solid state, because in liquids ions are mobile, contrary to solids where ions are fixed.

Name of this compound is calcium chloride.

Calcium chloride is a inorganic salt with ionic bonds between calcium and chlorine. It is a colorless crystalline solid at room temperature, highly soluble in water.

Aluminium chloride is a salt with ionic bonds.

In molecule of methane (CH₄) all the atoms around the central element (carbon) are equivalent (four hydrogens) and it has a net dipole moment of 0 (vectors of dipole moments cancel each other, dipole moment is zero).

7) Answer is: Sodium chloride has a higher boiling point than sucrose.

Sucrose or table sugar (C₁₂O₂₂O₁₁) composed of two monosaccharides. Monosaccharides glucose and fructose are linked with an ether bond between C1 on the glucosyl subunit and C2 on the fructosyl unit.

Boiling point of sodium chloride is 1413°C and sucrose decomposes at 186°C and form caramel.

8) Answer is:  It is a salt of three polyatomic ammonium ions and one polyatomic phosphate ion.

Ammounium ion is polyatomic because it is composed of one nitrogen and four hydrogen atoms.

Phospate anion is polyatomic because it is composed of one phosphorus and four oxygen atoms.

Electronegativity is a chemical property that describes the tendency of an atom to attract a shared pair of electrons towards itself.

Manganese has oxidation number +2 and phosphate has charge -3.

Polyatomic ions have many charges.

Polyatomic ions are made up of two or more types of atoms.

A polyatomic ion, also known as a molecular ion, is an ion composed of two or more covalently bonded atoms or a metal complex that can be considered as a single unit in the context of acid and base chemistry or salt formation.

-Polyatomic ions have many charges.

-Polyatomic ions are made up of two or more types of atoms.

The terms atom, ion, element and compound are used in chemistry

• Atom is the smallest material consisting of a nucleus, which contains protons, neutrons, and electrons, Atom is neutral or not charged.

An element can be an atom or element molecule. Atoms such as Ag (argon), Fe (Iron). If it is a molecule, it ‘ll be an atomic combination of the same type, for example: O₂,

• Molecules are neutral particles consisting of two or more atoms , it can be a same or different

- If it is consists of atoms of the same element is called the Element molecule, for example: N₂, Cl₂

- If it consists of different types of element atoms called Compound molecules, for example: H₂SO₄, NaOH

Atoms with low ionization energy (especially from groups IA or IIA in the periodic system will tend to release electrons, whereas atoms with large electron affinity energy, especially groups VIA or VIIA will tend to bind electrons

Ions that have one atom are called single ions, while 2 atoms or more are called polyatomic ions

So the correct answer is:

Polyatomic ions have many charges.

Polyatomic ions are made up of two or more types of atoms.

the atoms that belong to the same

answered: shainaanderson24
A polyatomic ion is a charged chemical species made up of two or more atoms covalently bonded or of a metal complex that can be considered to be acting as one unit. I hope this helped, sweetie.

an ion made up of two or more atoms covalently bonded

i had this on a test and got it right 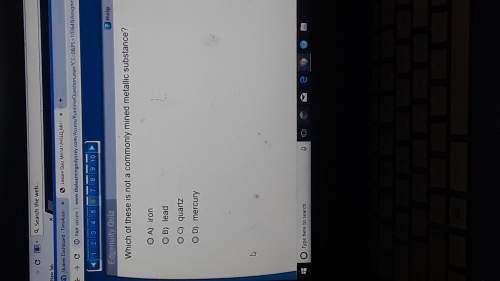 Chemistry, 21.06.2019 23:00, alextoro
Atypical barometric pressure in denver, colorado, is 615 mm hg. what is this pressure in atmospheres and kilopascals?
Answers: 2
continue

Mathematics, 05.05.2020 16:12
Part A: Create a stemplot for each set of data. Justify your reasoning for split or nonsplit stems. (10 points) Part B: Compare and contrast the two data sets. Justify...

Social Studies, 05.05.2020 16:12
In which stage of socialization do employees adopt the goals and values of the organization, recognize what the organization has been through, and converse with others in the organ...

Geography, 05.05.2020 16:12
When the spacecraft is located at exactly the halfway point between Earth and Mars, how does the strength of the gravitational force on the probe by Earth compare with the strength...

Physics, 05.05.2020 16:12
What would happen if a white dwarf gained enough mass to reach the 1.4 solar-mass white dwarf limit?...
Other tasks in the category: Chemistry More task
Total solved problems on the site: 13351565
Instant access to the answer in our app
And millions of other answers 4U without ads