In some areas of the earth, the crust is squeezed and pushed upward. this is a process in that it directly forms

answered: eloyjrcruz101
So I believe this is a Convergent boundary and mountains..

if you come from study island then the answer is constructive,mounatins

In some areas of the Earth, the crust is squeezed and pushed upward. This is a Compression process.

The Compression is the term that basically introduces to a set of stress that is directed towards the center of a mass of the rock. This can also result in the folding of the rocks. This occurs just because of magnitudes of lithostatic stress that is large in the tectonic plates. The tectonic-scale deformation is always ruled to the net compressive stress. This is the highest compressive stress that can be implemented to a material before the failure happens.

In that, it directly forms the mountains.

The mountains are erupted and formed when the movements of tectonic plates occurs which create the volcanoes along the boundaries of the plates.  The plates collide together which results in triggering the deformation and the thickening of the crust of Earth which leads to crustal uplift forming the mountains. The compression process leads to the deformation, and then the folding and after that, the faulting of the layers along the convergent boundaries of the plates.

Squeezing together of two plates is known as compression. It leads to buckling and uplifting of rock masses. Compressive forces acts concentrated at a point. Usually, this form of collision is usually observed along a convergent margin in which two plates are squeezed together and both leads to upbuilding as none of the plate goes or slides beneath another.

This usually leads to the formation of mountains and highlands. The Himalayas is a product of such form of compressive forces.

I got it right in study island

answered: brittanyjacob8
I would call this squeezing a tectonic process whereby there is lateral compression such as occurred in the Front Ranges of the Rockies in Canada and is manifested in thrust faulting and folding to create mountains of the sedimentary strata. I have seen this with my own eyes when I worked in this region of Alberta, Canada as a geologist.

answered: roneesmith2016
It will directly or automatically form mountains

the answer is the first option

just googled it m8. not that hard 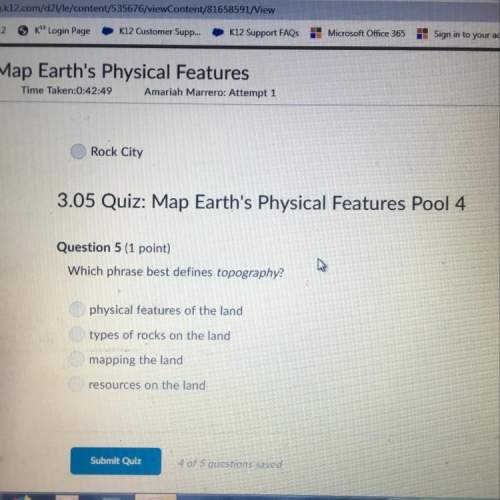 Chemistry, 22.06.2019 17:30, Naysa150724
Oil rich countries in the middle east cover about 4% of earths total land area but prossess about 48% of the worlds known oil reserves what is the main reason for high concentration of reserves in this part of the world
Answers: 3
continue

Chemistry, 23.06.2019 06:30, meiyrarodriguez
(04.03 hc) use complete sentences to explain how the mass of carbon is conserved during cellular respiration.
Answers: 3
continue
Do you know the correct answer?
In some areas of the earth, the crust is squeezed and pushed upward. this is a process in that it d...

Social Studies, 25.02.2021 08:30
What new position did the ming dynasty create in the government and what were its responsibilities?...

English, 25.02.2021 08:30
Directions: Compare and contrast your own ideas with the quotations below from the famous personalities in the Philippines. You may use different signal words and tool...

Mathematics, 25.02.2021 08:30
10. The school pool needs to be refilled after it was emptied for winter cleaning. Water flowing through both a small pipe and large pipe can fill the pool in 6 hours. Water flowi...