The model shows two types of proteins, channels and carriers, allowing the movement of molecules into the cell. as indicated by the model, what question is best asked about the role of the proteins in this type of transport?

The answer is D

I just guessed and got it right

-Q. How do membrane proteins aid in the movement of hydrophilic substances across the membrane?

Transport proteins spanning the plasma membrane facilitate the movement of ions and other complex, polar molecules  which are typically prevented from moving across the membrane from the extracellular or intracellular space.

Lipids are composed of fatty acids which form the hydrophobic tail and glycerol which forms the hydrophilic head; glycerol is a 3-Carbon alcohol which is water soluble, while the fatty acid tail is a long chain hydrocarbon (hydrogens attached to a carbon backbone) with up to 36 carbons.

Their polarity or arrangement can give these non-polar macromolecules hydrophilic and hydrophobic properties. Via diffusion, small water molecules can move across the phospholipid bilayer acts as a semi-permeable membrane into the extracellular fluid or the cytoplasm which are both hydrophilic and contain large concentrations of polar water molecules or other water-soluble compounds. The hydrophilic heads of the bilayer are attracted to water while their water-repellent hydrophobic tails face towards each other- allowing molecules of water to diffuse across the membrane along the concentration gradient.

There are two types:

Channels or pores are filled with water, enabling charged molecules to diffuse across the membrane,  from regions of high concentration to regions of lower concentration down the concentration gradient -this is a passive part of facilitated diffusion. Channels may undergo minor changes to become open or closed whereas pores are always in open states e.g. H2O movement into and out of the cell via aquaporins.Carrier proteins bind specifically bind to molecules and move them across or against concentration gradients. Unlike facilitated diffusion, carrier proteins directly or indirectly use energy in the form of  ATP and modify solute specific regions, that aid in regulating ion exchange, through the hydrophobic layer of the plasma membrane- this is called active transport. e.g. Na+/K+transported by the enzyme ATPase

Learn more about membrane components at 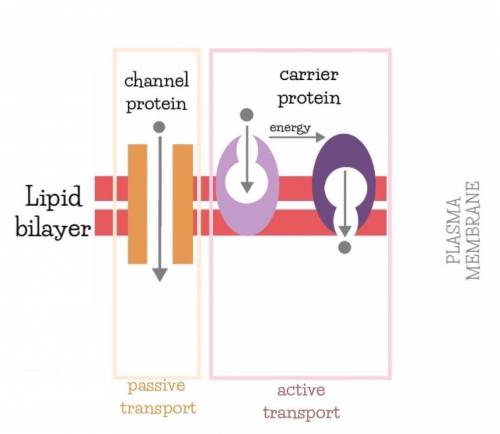 Question: The model shows two types of proteins, channels and carriers, allowing the movement of molecules into the cell. As indicated by the model, what question is best asked about the role of the proteins in this type of transport? A) How can proteins be used in active transport? B) How do proteins allow for endocytosis of large molecules? C) How can molecules move against the gradient through proteins? D) How do proteins allow for facilitated diffusion of molecules into the cell?

The question will be "D) How do proteins allow for facilitated diffusion of molecules into the cell?"

the cell cycle is the final answer! : )

Biology, 21.06.2019 23:20, towelmearowel
What are the most explosive events that occur on the sun? umbras solar flares solar winds prominences
Answers: 2
continue

Biology, 22.06.2019 09:10, kaciebrin211
Hormones are chemical molecules produced by endocrine glands. one such endocrine gland is the thyroid gland, which synthesizes the thyroid hormone, which in turn affects the heart muscles. which two statements describe the probable reason for the function of the hormone? the cells in the heart have specific receptors that allow for the intake of hormones. the heart and the endocrine glands have the exact same types of cells. all cells make the same types of hormones. thyroid hormones show their effect on the heart by means of specialized cells. thyroid cells and cardiac cells have different dna.
Answers: 1
continue

Biology, 22.06.2019 09:20, Daruk
Stephen is a student who wants to test his knowledge of medical terminology. which option could he use?
Answers: 1
continue

Biology, 22.06.2019 11:30, nevejames07
What materials must dams have to produce electricity, and what must occur?
Answers: 1
continue
Do you know the correct answer?
The model shows two types of proteins, channels and carriers, allowing the movement of molecules int...

Mathematics, 01.12.2020 03:10
Please help FAST will try to give branliest ...
Other tasks in the category: Biology More task
Total solved problems on the site: 13540727
Instant access to the answer in our app
And millions of other answers 4U without ads